Jackson Hole, for being the small town that it is, is quite the food scene.  After a day of playing outside, the big question is what to eat for dinner!  We have everything from Mexican tapas at Hatch, Nepalese samosas at Everest MoMo Shack, and Japanese octopus ceviche at Suda.  But, while you’re here, you should keep that adventurous spirit going with some of our local specialties: Elk and Bison!  Now, you won’t be eating the elk and bison that you see out of your car window; restaurants get their elk and bison farm raised, but that doesn’t diminish how tasty they are!

Elk and Bison are very lean cuts of meat.  Unlike a cow or pig, the fat on elk and bison do not contribute to the flavor at all, so a good cut of elk and bison will have no fat.  But don’t let this scare you—the flavor in the game animals is amazing!  With being lean, you might also think that the meat will be tough and chewy, but Jackson Hole chefs have mastered the art of cooking these animals.  Most chefs will Sous-Vide the cuts of meat, which means that they are slow cooked in a water bath to an exact temperature and then when ordered, they are grilled and seared to perfection.  Every good server will tell you that game meat should be ordered Medium-Rare and below and they would be right.  Because of how lean the meat is, anything over medium-rare would really make it chewy. So, be bold and go for it, try something new and unique.  You won’t be disappointed.

If you want the best experience with elk and bison, we would recommend the following restaurants:

The Blue Lion: A staple in Jackson Hole for fine dining. They usually have a bison and elk tenderloin on the menu. The buffalo tenderloin comes with a wild Montana huckleberry sauce to give you an entrée truly from the West.

The Snake River Grill: Another fine dining restaurant with a great wine selection and cocktails.  They like to switch their menu quite frequently to keep things fresh, but currently they have an elk New York steak served with springtime asparagus and Chanterelle mushrooms.

The Gun Barrel: A long standing restaurant known for their game selections and more of a family style restaurant than the Blue Lion and the Snake River Grill.  They currently have a Bison Carpaccio for an appetizer, served with Dijon mustard and Gouda cheese. They also have five different entrees to satisfy an adventurous appetite, from the Elk Chop to the Bison Prime Rib. 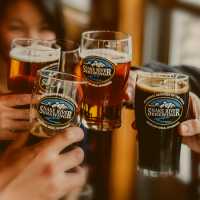